Last Saturday, Turning Wheels for Kids held a Bike Repair Clinic at DPR’s San Jose office. For those not familiar with the event, here is some background information on these repair clinics…When Turning Wheels for Kids was founded, the idea was to provide new bikes to kids whose families could not afford other presents at Christmas time. Many times, a bike from Turning Wheels for Kids is the only present that a child receives. As things evolved, we realized that a simple flat tire is the same as a death sentence for a bike. Once something is wrong, then the bike gets left outside to rust, becoming useless. The repair clinic concept was born from that--we decided to go into low-income areas and fix kids’ bikes for free. Whatever we could do to get kids back on their rides, we would do. Bikes encourage children to get outside, exercise and fight obesity.

Going back to last Saturday, here’s my experience of volunteering at the Bike Repair Clinic…I knew it was going to be a good day when I showed up to the office at 9 in the morning--a full hour before the event--to find a family of three already patiently waiting. I quickly showered (after a nice commute by bike) and got with the other volunteers from DPR, Turning Wheels for Kids and the Bike Doctorz who were starting to arrive, and we began setting everything up--tables, large shelters, parts, bike stands and, of course, the barbeque! As the clock struck 10, we were ready for the public. Some bike repairs were easy, just some flat tires, which new tubes quickly fixed. Others required much more. One bike started out with “just the tires need air.” Once I began going through the bike, the repair list started to grow: old tubes--fixed, broken pedal--replaced, loose crank--tightened, ripped bar grips--new ones installed, and lastly, a broken brake handle that was also replaced. The boy patiently waited while I fixed everything and showed him what I was doing. He was very shy and barely spoke a word. When I was done and handed him his bike back, he surprised me by exclaiming very loudly, “THANK YOU!” Then, he rode his bike around our parking lot for an hour with a huge smile glued to his face. This kind of instant feedback is what makes these repair clinics so rewarding.

There are many other similar stories that arose from the 95 bikes that were repaired that day. From the excited kids who have not been on their bikes in years to the super appreciative parents who do not have the means or knowledge to do the repairs themselves, a good time was had by all.

Many thanks to all who came out to lend a hand (and their bike tools)! 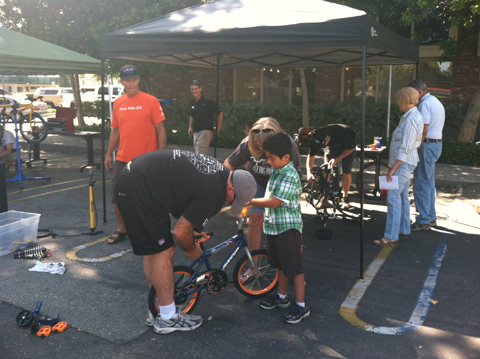 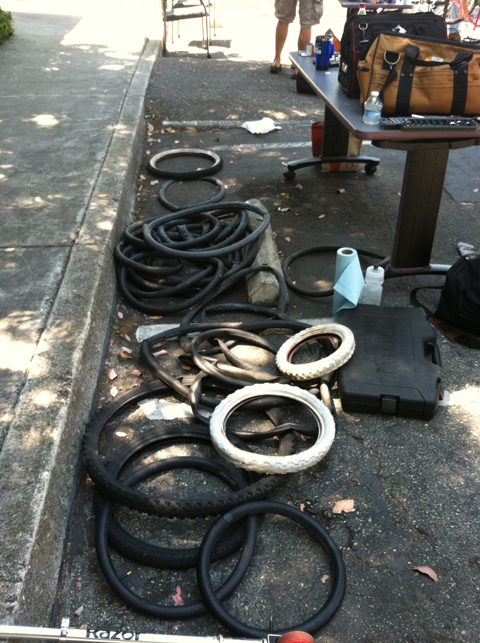 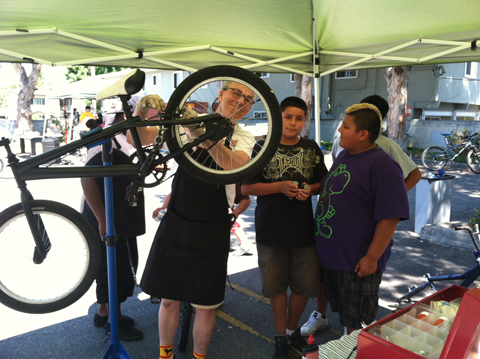