This article is included in the 2017 Year in Review edition of the DPR Newsletter.

Ninety minutes outside of Raleigh, NC and Richmond, VA, the 70-bed Virginia Commonwealth University (VCU) Health Community Memorial Hospital (CMH) in South Hill, VA had a challenge. Because of the large construction boom in North Carolina and southern Virginia, the number of qualified med-gas installers in the area have more than enough work to keep them busy in their respective cities.

After the downturn of 2008, many experienced construction tradesmen left the field—for good. According to the Bureau of Labor Statistics, national skilled construction employment is down 19 percent from its 2007 peak, with the decline particularly stark in areas strongly affected by the housing bust. Now with construction roaring, many new, inexperienced workers have entered the job market, and–as with any new employees in any industry–need time to train and develop, increasing the importance for contractors to have self-perform work and prefab expertise.

The DPR team working on the design-build, 170,000-sq.-ft. replacement hospital found a creative solution for its dearth of labor, while still using a local subcontractor, as well as a way to improve overall efficiency: using prefab strategies for patient headwalls, med-gas zone valves and central utility plant skids and piping.

Every patient bed in the hospital required framing, med-gas, electrical rough-in and wood blocking at the head of the bed to accommodate the patient needs and provider care. With 70 identical beds, the team designed and constructed the headwalls off-site about 50 miles away, with pre-manufactured piping, electrical and wood blocking in a panelized wall system, which was then transported to site and installed in the patient rooms. The team then built the rest of the walls around the headwalls, and connected the overhead piping to the in-wall piping. What makes the headwalls notable is that many were back-to-back so one prefab wall accommodated two patient rooms.

Other prefabrication efforts on the project included skids and piping for the boiler and chiller plant that were shop-fabricated and shipped fully assembled to site. What would normally take months to complete, took only days in the field.

The DPR team carefully kept track of hours saved by the prefabrication efforts, turning VCU CMH into a proving ground for the efficiency of prefabrication, with the data to back it up. 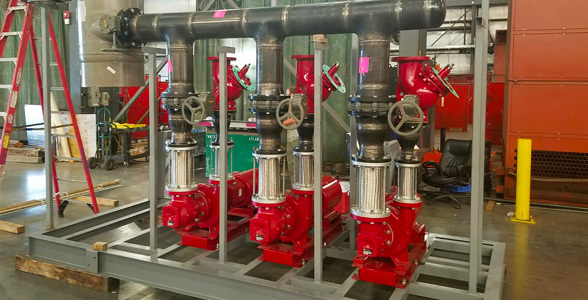 Prefabrication efforts on the project included skids and piping for the boiler and chiller plant that were shop-fabricated and shipped fully assembled to site. (Photo courtesy: Rob Johnson)

When compared to traditional in-field methods and production rates:

“We find it rare to have prefabrication measured in such an empirical way as we have done at VCU Health Community Memorial Hospital. We believe in this, and with the support of our trade partners, we are proving the efficiency of prefabrication,” said DPR’s Rob Johnson. “We are excited to explore and study additional prefabrication strategies on future DPR projects.”

The prefabricated headwall strategy not only improved production rates and overcame a labor shortage issue, it benefited the project on the second-floor patient wing where in-wall rough-ins became the critical path at a critical point in the project. Having that work already complete mitigated a potential delay to the overall project schedule, allowing DPR to recognize another tangible benefit to prefabrication.

The DPR team will continue to push the envelope and prove the efficiency of other prefab strategies on future projects in big ways—always adapting, solving problems and moving ever forward.