DPR Volunteers the Key to Success for Annual Golf Tournaments 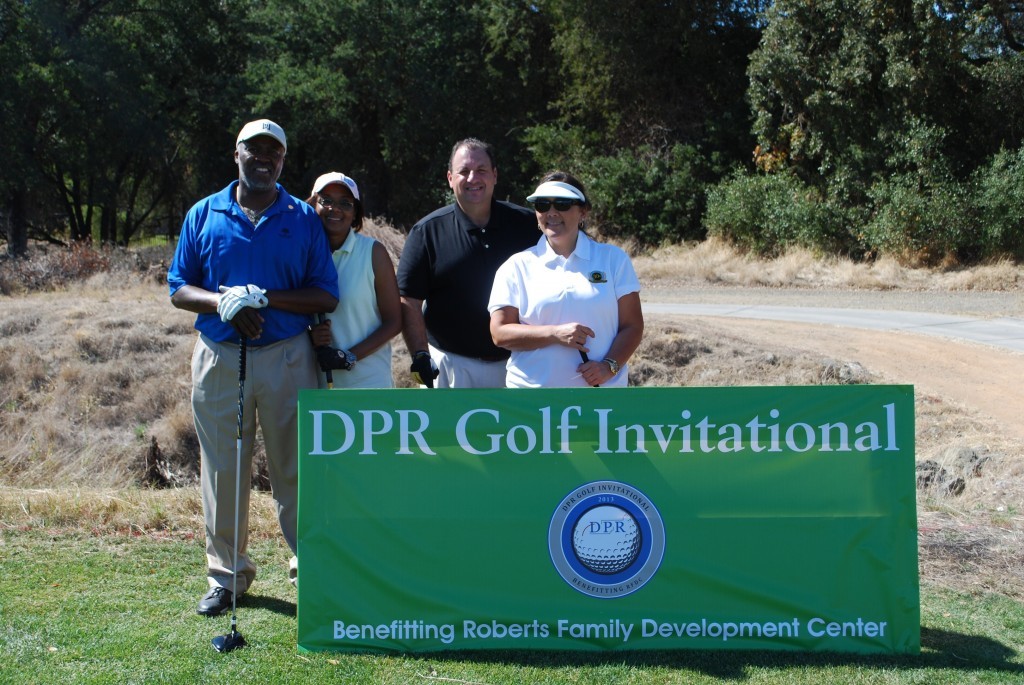 Two organizations supported by the DPR Foundation are set to receive an estimated $67,000 thanks to a pair of golf tournaments held in October in Atlanta and Sacramento.

First up was the “DPR Golf Invitational Benefitting Roberts Family Development Center (RFDC),” held Oct. 7. Building on the success of last year’s inaugural event, DPR increased its involvement from a major sponsorship level to hosting this year’s tournament for the Sacramento-based organization. According to DPR’s Sandi Graham, who serves as the Foundation liaison for the Sacramento office, this year’s event brought in more than $37,000 for RFDC.

Within DPR’s Sacramento office, a committee of eight, including Graham and the office’s Regional Manager Mark Cirksena, spearheaded the tournament effort. Graham said the committee’s meetings started on a monthly basis in April, but kicked into high gear as the tournament’s date drew closer. Aside from booking the venue – the event was once again held at the Morgan Creek Golf Course in Roseville, CA – the committee was responsible for soliciting sponsors and players, organizing the closing dinner and various raffles and golf challenges, and ensuring the day ran smoothly.

On tournament day, 26 volunteers – nearly a quarter of the Sacramento office’s 96 employees – attended the event, helping with everything from registration to raffle sales to aiding golfers on the course. In total, DPR employees contributed an estimated 300 volunteer hours planning and hosting the event. The dedication of the volunteers, which also included RFDC staff and supporters, made for a great tournament, according to Graham.

Following a day of golf, games and mulligans, including two hole-in-one opportunities and chipping and putting challenges, attendees were treated to dinner at the club, where they were shown a video introducing them to the work of RFDC. Sacramento City Councilman Allen Warren, who represents northern Sacramento’s District 2, attended the event. The sponsors secured by DPR this year included architects, engineering firms, subcontractors, suppliers and RFDC supporters.

The next day, on Oct. 8, DPR’s Atlanta office, now known as DPR Hardin, hosted its 8th annual “Building Great Things Golf Tournament” at the River Club in Suwanee, GA. Drawing a record 27 sponsors, this year’s event netted an estimated total of $30,000 in sponsorships, raffle tickets and mulligans for the Brookhaven Boys & Girls Club, part of the Boys & Girls Clubs of Metro Atlanta (BGCMA). This is the fourth year the event benefitted the club, which is one of 15 organizations supported by the DPR Foundation.

Andi King Wieczynski, who acts as a liaison between the club and DPR Hardin, said that a full fourth of the Atlanta office – 30 of its 120 employees – volunteered in some capacity to make the tournament a success. Even with its long track record, the event still requires a lot of planning, Wieczynski said, noting that about one half of this year’s sponsors were from previous years; the rest were new sponsors solicited by DPR Hardin project managers and project executives. In addition, Wieczynski relies on Steve Bartkowski, a DPR Hardin employee and former Atlanta Falcons quarterback, to help acquire the raffle prizes, as well as pose for pictures at the 17th hole.

The money raised through sponsorships covered the Atlanta event’s green and cart fees, dinner, reception, and prizes. Additionally, DPR Hardin volunteers secured A Printers Inc. as this year’s Bloody Mary Bar sponsor and The Color Spot as the Signage sponsor. Wieczynski added that the River Club provided the greens at a reduced fee and donated a foursome to the raffle.

Once again, kids from BGCMA joined the Atlanta event for the check presentation and pictures. This year, 10 kids from the George Washington Carver Club, which is in the same network of clubs as the Foundation-supported Brookhaven, were shuttled to the River Club. Sixteen-year-old Sir Dalvin Holloman, a candidate for the BGCMA “Youth of the Year” award, addressed the group during the tournament dinner.

Supported by DPR’s Sacramento office, the Roberts Family Development Center (RFDC) provides services in the Sacramento community. With a holistic approach focusing on early childhood and family education, economic empowerment and technology, RFDC’s goal is to nurture personal growth, strengthen families, and enhance community development and civic involvement. Since December 2008, the DPR Foundation has supported the center with grants totaling $190,000.

Supported by DPR’s Atlanta office, the Brookhaven Boys & Girls Club, part of Boys & Girls Clubs of Metro Atlanta (BGCMA), promises to provide a quality developmental program that empowers metro Atlanta youth, especially those from disadvantaged circumstances, to become productive adults. Since December 2008, the DPR Foundation has supported the club with grants totaling $265,000. In February, BGCMA named DPR Construction its “County Corporate Partner of the Year” for its ongoing financial support as well as its dedication to hands-on volunteering at the Brookhaven Boys & Girls Club.