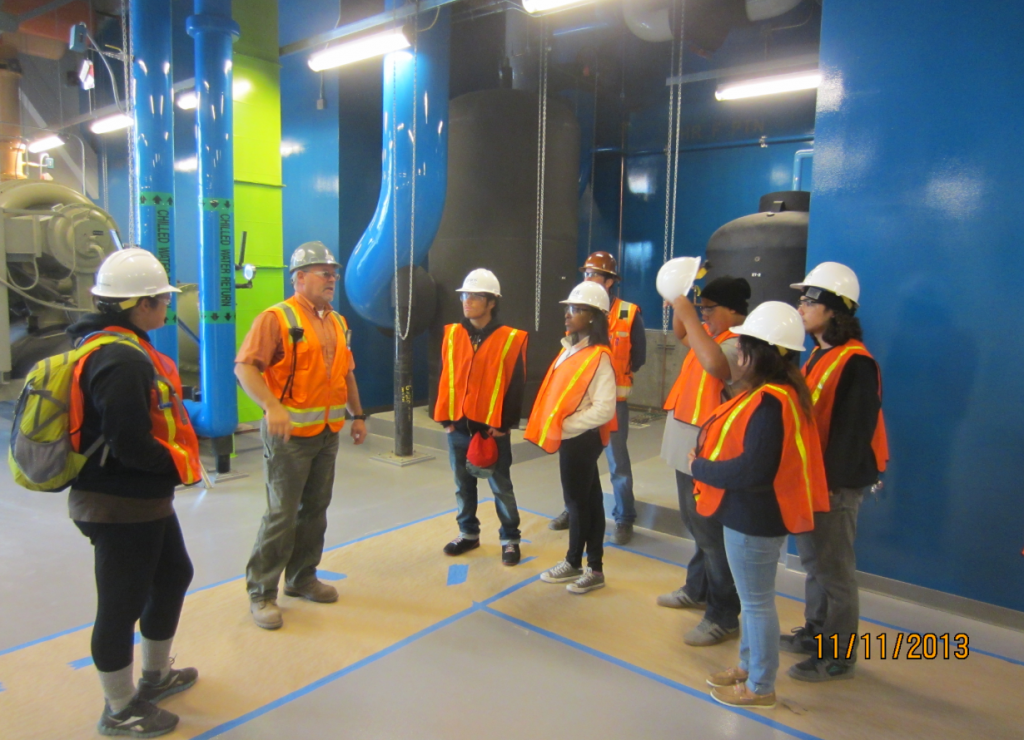 On Nov. 11, four participants of the Seven Tepees Youth Program in San Francisco got a sneak peek into the inner workings of the University of California, San Francisco (UCSF), Medical Center at Mission Bay jobsite thanks to a career day tour organized by DPR San Francisco staff.

Led by Jamie Robertson, Ray Trebino, Ralph Eslick and others from the UCSF Mission Bay project team, along with two Seven Tepees employees, the four kids got a personalized tour of the future home of three breakthrough hospitals – children’s, women’s specialty and cancer – at San Francisco’s Mission Bay.

Steven Grandin, the DPR Foundation liaison for the San Francisco office and a Seven Tepees board member, said the youth were impressed with the size and complexity of the project and enjoyed riding in the elevators, putting on safety gear and seeing new construction before its public opening in 2015.

Following the tour, the group returned to the San Francisco office where Patricia Palomares and Patricia Kostiew Yale hosted a lunch, during which several DPR employees relayed a little bit of history about how they came to work at DPR. A consistent message, according to Grandin, was that the road planned is not necessarily the road taken and that they didn’t end up where they thought they would.

Additionally, Chris Rippingham gave an informative presentation on building information modeling (BIM) and how modern technology is constantly evolving at construction sites. Melanie Brittle also spoke about her role in training, as well as potential programs that she is considering teaching at Seven Tepees.

The career day event dovetails with the San Francisco office’s annual intern program, which hosted two Seven Tepees interns this past summer. In addition to routine administrative tasks, such as printing, filing and answering phone calls, the interns also toured several job sites during their stints. The program will be repeated in 2014.

Seven Tepees Youth Program is dedicated to impacting the lives of promising inner-city youth, fostering the skills they need to make lifelong positive choices and to create their own opportunities for success. The program targets inner city youth and works with them for a period of seven years, providing them with the building blocks that will help them create positive, successful futures. Youth are encouraged in social competency, academic skills, healthy self-esteem, exposure to new options, and increased understanding and appreciation of their natural environment.